I was impressed by James Bosworth’s insightful analysis of Brazil’s election results, with “Five Points on Dilma.” Copying his style, here are five points on the first-round election in Brazil’s smaller neighbor to the south: 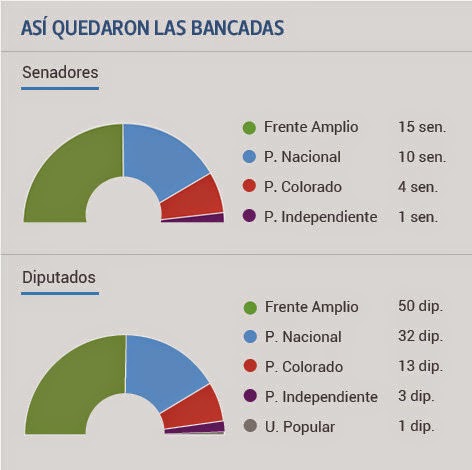 The FA keeps a majority: In a surprise twist that defies all of last week’s projections and opinion polls, Uruguay’s ruling Frente Amplio (FA) is poised to maintain effective control over both legislative houses for the next five years. Although a runoff between the FA’s Tabare Vazquez and National Party’s Luis Alberto Lacalle Pou will take place on November 30, Sunday’s vote determined the breakdown of 2015-2020 congressional seats by proportional representation. According to electoral officials, the results are: FA 47.9 percent, National Party 30.96 percent, Colorado Party 12.92 percent and Independent Party 3.07 percent. The Electoral Court still has to confirm the distribution of seats, but every major news outlet in the country (see El Pais, El Observador, Radio Espectador and Radio 180) has reported that the FA has won 15 seats in the Senate and is sure to keep its 50 seats in the lower house. This gives them a guaranteed lower house majority, and if Vazquez wins the second round they will control the Senate (where they currently have 16 seats) as well, as the vice president casts the tie-breaking vote in the 30-member body. (Image credit: Montevideo Portal)

Vazquez gets a second wind: This is a huge boost not only for the Frente Amplio, but for Vazquez as well. His party’s list got four more points than those of the two largest opposition parties combined (the Colorado and National Party votes together have 43.88 percent compared to the Frente’s 47.9 percent). Because the bases of the Independent Party and smaller Popular Unity parties are center-left to leftist voters disenchanted with the FA, it is safe to assume the majority of their support will transfer to Vazquez as well. Factum’s recent runoff poll, which showed  the two candidates statistically tied at 48 percent for Vazquez and 47 percent for Lacalle Pou, no longer seems trustworthy, especially in light of all the major pollsters’ inability to predict Sunday’s outcome.

The Frente’s still got it (and its progressive laws are safe): As El Observador reports, this is the first time since the 1940s that a Uruguayan party stands to hold onto a legislative majority for three consecutive terms. Much of the international coverage of Uruguay’s election so far (see the New York Times, Reuters) has focused on the FA’s support of progressive yet controversial legislation as a reason for its potential defeat. Yet despite opposition to marijuana legalization, abortion decriminalization (and to a lesser degree) marriage equality from large segments of the country, these measures have so far not become hot-button issues. In addition to ensuring that these initiatives will remain in place, Sunday's vote confirms that the FA has a unique ability to push the envelope without taking a hit in the polls. This has been illustrated before, however, in the wake of the October 2012 law that decriminalized abortion. The measure was opposed by 46 percent of the country, and in April 2013 51 percent of Uruguayans said they would support holding a referendum on whether to repeal it. Yet just 8.9 percent of the electorate actually came out to support an eventual referendum in a June 2013 vote, essentially leaving the issue settled.

NO a la Baja: The push to lower Uruguay’s age of criminal responsibility from 18 to 16, which until recently looked guaranteed to pass, failed by six points (53 percent opposed and 46.99 in favor). Support for the initiative dropped significantly over the past year due largely to the efforts of the civil society coalition behind the creative “No a la Baja” campaign. The campaign also got a boost from Uruguay’s voting system, which required supporters of lowering the criminal responsibility age to present a slip indicating their preference alongside their party’s ballot list.  Not including it was counted as a “no” vote, so the fact that the Frente Amplio and second-largest segment of the National Party did not include the slips automatically with their own lists likely made an important impact.

“El Pepe” is popular:  Jose “Pepe” Mujica’s signature humble, plain-spoken image has served him well politically. Some 62 percent of Uruguay’s population views him favorably, and 58 percent approve of his government, according to an October Cifra poll. This support has also translated into backing for his Popular Participation Movement (MPP) sector of the Frente Amplio. As Radio Espectador reports, the MPP’s list was the most supported among FA voters, making it the largest single FA bloc in both houses. This bucks another historical trend, as most Uruguayan presidents see their party’s internal faction lose support after leaving office, according to El Observador.